Symbolism of the Brandenburg Tor

When an 18th century King builds a monument to peace, he would hardly expect it to become the focal point of future conflicts and battles, or for it to be appropriated as a symbol by other parties.
​
It was reasonable for Friedrich Wilhelm II to expect it to be a peaceful memorial, and nothing else, when in 1791 he commissioned Karl Gotthard Langhans to build  the Brandenburg Tor as part of his grand city design. Unfortunately, history was to prove somewhat indifferent to his expectations, and has altered the Tor’s identity to become a symbol and reflection of a united Germany herself.
​

Beginning of a symbol

​The Brandenburg Tor, or Gate, was meant to be exactly that — one of the monumental entryways into Berlin in front of Pariser Platz square, the magnificent terminus to an elegant boulevard of linden trees known as the Unter der Linden, which led directly to the royal palace. Langhans based his design on the Propylea, the gateway to the Acropolis in Athens, in keeping with a city then admiring the values of classical civilisation.

The monument consisted of twelve Greek Doric columns, six on each side to form five roadways. Originally, ordinary citizens could only use the outer two roadways, while the three inner roadways were reserved for aristocrats. High above their heads stood the Quadriga (pictured right), an iron cast representation of the Goddess of Peace driving a four-horse chariot in triumph. The splendour of the design was also meant to awe the traveller as he entered the most important city in the Prussian Kingdom. It was an impressive statement of power and grandeur that unfortunately, did not grace its original site for very long.
​

Reflecting the Rise and Fall of the Nation 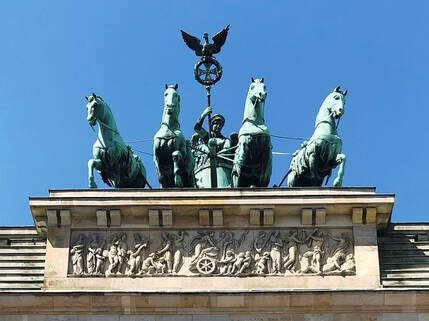 ​In 1806, Napoleon conquered Berlin as part of his quest to become supreme ruler of Europe. As part of the spoils of conquest, he took the Quadriga back to Paris, an symbolically appropriate act. Upon his downfall at the end of the Napoleonic wars however, the goddess was returned and her olive wreath was exchanged for the Iron Cross, thenceforth becoming a goddess of Victory.

The new symbolism was again befitting the image of one of the victorious nations of the continent. In over a century and a half, the National Socialist party was to seize power and the Brandenburg Tor once more became associated with a forceful ruling power in the city. For the Nazis, the gate was a symbol of their German identity, and of their power, as they sought to erase the humiliation of Germany’s World War I defeat. In 1933, the National Socialists marched under the Gate in a martial torch parade, and ushered in a new era of madness and brutality.

By the end of the second World War, it was one of only two structures left intact in the whole of Pariser Platz, the other being the Academy of Fine Arts. Both Eastern and Western Berlin Governments cooperated in restoring the Tor, even as Allied forces were dividing the rest of the country and the city itself. Being the national symbol that it was, the Tor would soon come to reflect the divisions in the rest of the country, when in 1961 its entryways were closed off to become part of the infamous Berlin Wall.

For the next twenty years, it would remain divided, as the Cold War raged on and the city split into two, a schizophrenic with two colliding characters — capitalistic and free on one side of the Tor, and repressively Communistic on the other. In the words of the Governing Mayor of Berlin during the 1980’s, Richard von Weizsacker; “The German Issue will remain open as long as the Brandenburg Gate is closed.”

The day the Gate was opened arrived on 22 December 1989, just days after the Berlin Wall itself was torn down by willing hands on both sides of the divide. as West German Chancellor Helmut Kohl walked though the Brandenburg Gate to be greeted by the East German Prime Minister Hans Modrow. Today, the Tor has come to stand for unity and freedom, as it continues its role as a symbol and rallying point for Berliners and the German nation.