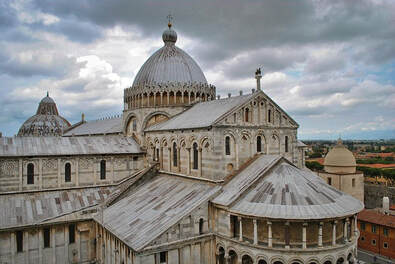 The buildings of the Campo dei Miracoli had their start in the 11th century. This was a time of constant warfare and struggle, as wealthy merchant-states fought between themselves for power, wealth and position. Pisa was one of the great economic centres of Italy, thanks to its sea trade routes, its vast merchant fleet and equally vast navy. It was an uneasy prominence, however, for the city was in a constant struggle with the neighbouring state of Florence, who longed to take over the Pisan’s trade routes.

Competition between the two took many forms. One particularly favoured method was to build an awe-inspiring monument as a sign of wealth and political prestige, which lead to the Pisans building the Cathedral (pictured right) - the largest, most ornately beautiful religious edifice ever made in the Pisan-Romanesque style. 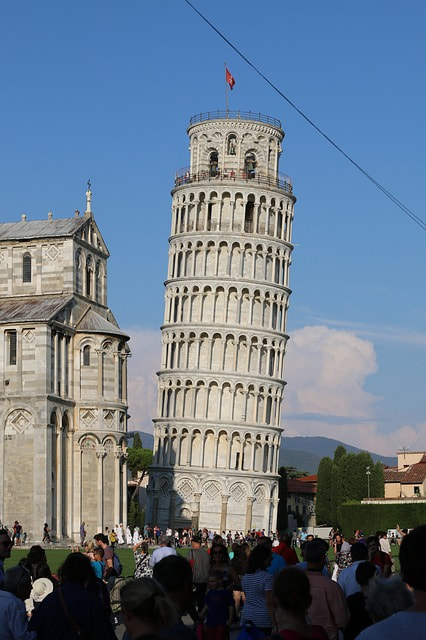 The strong political motivation behind building the Cathedral can still be seen in some places. On the cathedral's facade sits a long inscription celebrating the town's victorious war exploits. There are also reminders of Pisa’s military might. The Cathedrals’ nave or wide aisle is separated from the narrower aisles on either side by two rows of twelve huge red granite columns that once stood in Greek or Roman temples: these were taken by the Pisans in war and brought home in their ships.

The interior of the Cathedral has also said to be a part of science history. Supposedly, the slow swinging of the chandelier suggested to Galileo the idea of a pendulum. The same chandelier is claimed to have aided another great scholar in deriving the secret of the attraction of gravitation. Modern architects often rave over the Cathedral’s architecture, which is considered to be the finest example of Pisan architecture. Their opinions were shared by the builders of the Cathedral, who were so impressed by their own work that they inscribe in Latin in the far left arch: "This marble church has no equal".

A Bell Tower Above All Others
​
Once the Pisans had their spectacular Cathedral, what did they do but decide to build a bell tower nearby, for of course no cathedral would be complete without its bell tower (pictured left). Of course, the decision may have been influenced by the fact that Venice had just recently finished a much-admired bell tower. The Pisans were determined to have a one too; and since the Venetian tower was of bricks, the Pisans would have one with nothing less than fine white marble.

The decision to build the Tower was to land the Pisans with a massive headache for the next 800 years. First, they needed a location for it. Unfortunately the Cathedral was already occupying the best spot, so the next best was used. It was swampy, uneven ground, which from the very beginning plagued them with problems. The building stood on subsoil consisting of clay, fine sand and shells — hardly a stable foundation.

Construction of the tower began in 1174 and progressed in fits and starts, as innumerable wars with eager Florence drew money away from the Tower. There were in fact so many breaks in construction that a succession of architects (scholars still argue over their exact identities) tried their hand at building the tower, each adding new features, so that the style of the tower at the bottom is completely different from the style at the top.

In a way, this was good for the tower: modern analysis shows that if the tower was built all in one go, the subsoil wouldn’t have consolidated and the tower would have collapsed completely by now. In any case, over the centuries the loose soil became responsible for the slow sinking of the Tower, a colossal headache for the architects trying to correct the famous lean, and a booming tourism industry for the city. The steady flow of visitors is in no way lessened by the persistent stories going around that the 11th century Pisans had the brilliant idea of deliberately making the tower lean as a great tourist gimmick.

Echoes in the Baptistery
​
The last structure to be built was the baptistery, which was begun in 1152, and took over two hundred years to complete. The building probably the only one without an overtly political message, as it was built out of religious necessity. According to strict theological doctrine, un-baptised persons may not enter a church, which posed something of a conundrum for newborn babies, who therefore couldn’t enter the church to be baptised. The Italians solved the problem by building the baptistery outside the church. When it comes to civic pride however, it would hardly come as a surprise that the baptistery was designed to be one of the largest in Italy, and the ancient Pisans would have been pleased to know that today, it is considered ‘perhaps the most beautiful Baptistery in Christendom’.

Any baby about to be baptised in this magnificent structure would certainly have made his presence known, as the acoustics of the interior are such that even a soft whisper reverberates around the room. The acoustics are in fact one of the building’s main draws, and baptistery attendants often earn tips by singing for tourists who marvel at the echoes — a single voice is said to sound like an entire chorus of singers. After much research, Italian musicologists came to the conclusion that the building was deliberately designed with acoustics in mind, and have even tossed around the idea of holding a concert inside the building as a tribute to the ingenuity of the builders.
​
Unfortunately for the pride of the ancient Pisans, modern day Pisa is a far less prominent city, with most of the attention focused on these monuments from more influential times. Perhaps these proud forefathers would be content to know that their buildings, created as statements of wealth and power, are still so admired that they draw visitors from around the world (and even from their rivals Florence and Venice) to their city, as they were intended to do.