Of all the holidays and festivals in Germany, Oktoberfest is arguably the most famous - and the most anticipated – celebration of all. Oktoberfest is a two-week festival held annually and is generally celebrated all over the world, but Munich’s Oktoberfest remains the biggest and is one of the largest festivals in the world with over six million visitors each year. Even though the festival is named `Oktoberfest’, it is normally celebrated beginning from the end of September, to allow for warmer weather for the celebrations to take place.
​

The Origins of Oktoberfest

​The first `Oktoberfest’ took place on October 12, 1810, to commemorate the marriage of Crown Prince Ludwig and Princess Therese of Saxe-Hildburghausen, attended by all the residents of Munich. What began as a celebration of a royal wedding evolved into a full-fledged beer festival over the years, as the drinking part at the end of the ceremony proved to be more popular than the horse races and the ceremony itself.

Since then, the annual beer binge has been repeated almost every year, interrupted only by war and the outbreak of epidemics.  The first carousel in the history of Oktoberfest was erected in 1818, followed by small beer stands popping up over the years. The beer stands were later replaced with beer tents and beer halls by 1896 as the festival got bigger and more popular with the residents of Munich.
​ 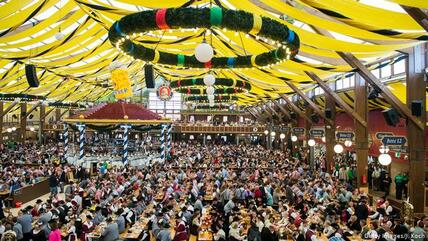 Nowadays, Oktoberfest is celebrated annually all over the world, even in Japan, and has become a full-blown festival filled with parades, music, games, rides, food, and of course, drinks. Beers are served in tents erected all over the festival ground, currently totalling up to 14 main tents, namely: Hippodrom, Armbrustschützenzelt, Hofbräu Festzelt, Hacker-Festzelt, Schottenhamel, Winzerer Fähndl, Schützen-Festhalle, Käfers Wiesen Schänke, Weinzelt, Löwenbräu-Festhalle, Bräurosl, Augustiner-Festhalle, Ochsenbraterei and Fischer Vroni. These tents are able to seat more than 100,000 people in total.

It takes good nerves and definitely a strong stomach to survive the festival’s 16 days of partying and drinking. Those intending to attend Munich’s Oktoberfest are advised to book seats with the tents earlier as they fill up very quickly every day. It may still be alright if you were to arrive in the afternoon without prior reservation, depending on the tent you go to, but finding a seat may be a bit of a problem at night if you don’t reserve earlier. It is also advisable to use public transportation to get to the venue as parking could prove to be a problem and it may take you ages before you finally find a parking spot, not to mention parking some distance off from the venue.