Chamonix. What else comes to mind if not visions of snow-capped mountains? Situated on the tallest peak in the Alps- the Mont Blanc- this enchanting French town is just 15 km from the Swiss and Italian borders. Chamonix has come a long way from when it was first discovered in the 18th century by two Englishmen, William Windham and Richard Pococke. Despite many changes since then, Chamonix has still managed to retain much of its traditional quaintness, with a beautiful mix of buildings from the baroque to the modern.

Of course coming to Chamonix means being prepared for robust activities- what more would you expect being on a mountain? If you’re looking for winter activities, this town, where the first official Winter Olympics was held in 1924, is just the place to be.
​

Traipsing In A Winter Wonderland

​During wintertime, skiing would probably be at the top of the to-do list- what better way to feel the rush of alpine air than by zooming down Europe’s highest mountain? Its most challenging route- the legendary Vallée Blanche- beckons to skiers of all levels. Or take a ski tour around the Chamonix valley for a bit of sight-seeing with a difference.

You must not spend all your time just skiing though as there really is a lot else to look forward to - hang-gliding, glacier-climbing. snowboarding and even mountain climbing are some of them.

Being in Chamonix, you could definitely pretend you are in an enchanting Never Neverland especially if you are there in the winter when everything is blanketed with snow. No need to rush to make sure you can get snow - winter activities begin in December all the way up to May.
​

Romping In The Summer Months 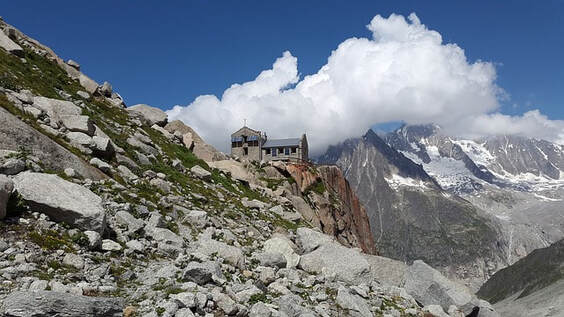 ​However the coming of summer doesn’t mean a shortage of activities either. In fact most tourists choose to go during the summer months when it is warmer but the air still crisp. With the snow gone and the rivers thawed out, you could go white water rafting, canyoning, hiking... The list is endless and even includes ‘safer’ sports such as golf and tennis.

The Mer de Glace (Sea of Ice) is beautiful and provides adventure in any season. Winter or summer, it flows through the valley and provides a lovely view for you to walk, hike, or just admire, from the up above.

Way Above The Mountaintops.... A Breathtaking Experience

Take a ride on the Aiguille du Midi cable car for a jaw-dropping view of Mont Blanc. Be prepared though as this could be a daunting experience- it is after all the highest mountain in Europe and being suspended in mid-air, thousands of feet off the ground, could prove a challenge in itself. It is most rewarding though, and you can ski down after conquering the ride.

Or choose to take the train up the Montenvers Railway, the first custom built tourist attraction in the valley which started operating in 1908. Also, do take a ride on the world’s longest and highest tramway, the Tramway du Mont Blanc. All three options promise you a splendid view of the world below and are definitely worth taking the time for.

​However if you are planning to take a trip to France in 2021st, you should also take some time off to explore the charming town of Chamonix itself. What was once the Charmonix Palace is now a beautiful Alpine Museum. A visit to this museum will reveal the changes Chamonix has undergone since it was first discovered in the 18th century. If you are in town between the months of July and August, you should also taste a bit of the classical and jazz concerts of the Semaines Musicales du Mont-Blanc at the Grand Salle of the Majestic.

Chamonix is the largest town on the Alps and a beautifully charming one at that. Its lovely buildings and architecture combine with a strong streak of sophisticated culture for which it is so famous. Being located on the borders of both Switzerland and Italy also means you could just hop over for a day trip. In fact with so much to do, you just may not want to go back at all!