Escorial - The Royal Monastery of Castille

A stark palace for an asture king

​The Escorial is more properly known as the San Lorenzo del Escorial, built in honour of a great victory scored by the Spanish army over the French on August 10th, 1557. The day being the feast day of St. Lorenzo (Lawrence), the King decided to have this palace built in his name.
Old palaces often leave an impression of grandness and luxury, but the Escorial has a different feel to it. It is imposing but stark, with relatively simple
windows and straight, undecorated lines. The only major decorative features here are the three main entrances and towers on each of the four corners.

The Escorial was built in a time when Spain region was at the peak of its power, but experiencing challenges on all fronts. King Philip II had inherited not only Spain but also its vast Empire in the Americas, Portugal, the Netherlands and parts of Italy. He had to face rebellion in the Dutch provinces, war with France and naval attacks from an increasingly bold England. Philip took his duties seriously, especially his self-appointed role as champion of the Catholic faith in the face of the Reformation.

He commissioned the architects Juan Batista de Toledo, and later Juan de Herrera to build the complex. It was built over 20 years, with constant supervision by the King himself.
​

The center of an Empire of faith and power 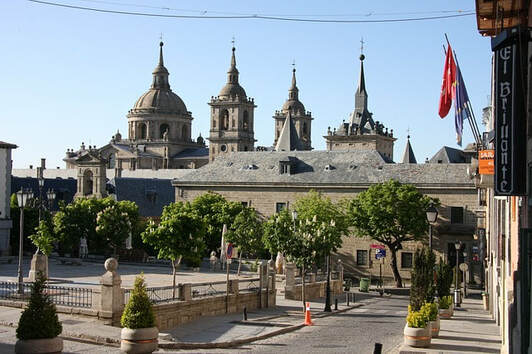 ​The church is the central building of the complex. Built of stone and located in the centre of the complex, the church has 500,000 square feet of space and four façades. The entrance to the church is on the Western façade. South of the Church is the court of the Evangelists, a square enclose by two storied cloisters. There is a small room which adjoins the choir of the church, which was where King Philip watched the celebration of mass when he was ill in his old age, and where he died in 1598.

The library at the Escorial is one of the great collections of Europe, with documents from Arabia, Greece and Palestine. Medieval works such as the manuscript for the Ballads of Alfonso the Wise are housed here as well. The collection numbers over 40,000 printed books and 4,700 manuscripts. The Escorial is home to artworks by major renaissance painters such as Titian, Velazquez and El Greco. There is also a collection of tapestries, some designed by Goya, the famous 18th century artist.

One of the objectives of the building is to serve as a royal Mausoleum for Philip’s father, Charles V and for future Spanish Kings. The most recently interred persons were Don Juan de Bourbon and his wife Dona Maria de las Mercedes, the father and mother of the present King of Spain.

After the throne of Spain passed into the hands of the French House of Bourbon, they added their touch to the Escorial. They found the taste of Philip too restrained and severe for their more relaxed and luxurious era, so they built the Palace of the Bourbons next to the church. The style of the decorations and artwork here are from the baroque and rococo periods, with crystal lamps, elaborate cabinets and frescoed ceilings of a style more similar to that popular in France in those days.

You can end the trip by visiting the nearby chair of Philip II. The King ordered a seat to be crafted out of a boulder on a nearby mountain. Here he sat to observe the progress of the construction of the Escorial, and here you can take in a full eye view of the Escorial as it stands today.

The Escorial is open 10 am — 5 pm Tuesday to Sunday from October to March, and 10 am — 6 pm from April to September. It is closed on Mondays and specific dates throughout the year.