Getting to La Tomatina

​Possibly Spain’s most famous festival, and indisputably the largest food fight in the world, La Tomatina takes place in the western Spanish town of Bunal and is held every year at the end of August, usually on the third or fourth Wednesday. The tomato-fight is actually only one event in a week long-festival in honour of the town’s patron saint, which includes musical performances, fireworks, feasting and other entertainments. No one really knows when or why it started, but whatever the original reason was, it was so much fun that the event quickly became a tradition and now every year, thousands of visitors come from around the world just to take part in it!

Before going to Bunal, it’s best to be prepared. Accommodations in Bunal are limited unless you book well in advance, and most people will stay in Valencia and commute to Bunal just for the day. As there are literally thousands of fellow tomato-throwers all heading to the same direction during a very short span of time, expect the trains, roads and buses to be very crowded. Despite being only 30 minutes west of Valencia, with a well connected and efficient public transport network, the sheer numbers means it is very difficult to get last-minute train or bus tickets going to or out of Bunal, so plan ahead.
​ 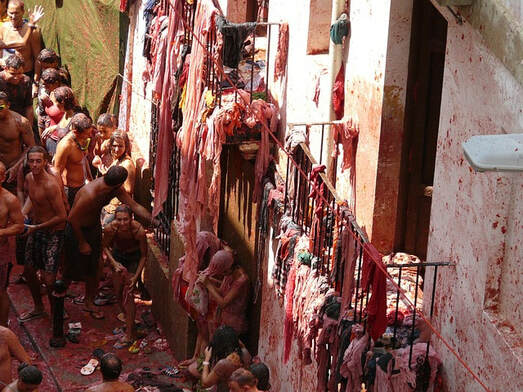 ​As the day of the event arrives, shopkeepers with businesses facing the Plaza de la Pueblo and the main streets of the city hurriedly put up boards and plastic sheeting over their windows and doors. A short while later, the streets start filling up with people, at first a trickle of local celebrants making last minute preparations, that quickly builds up to a flood of people packing into the squares and streets, both visitors and locals, all dressed in their oldest clothes, waiting impatiently and chattering at the top of their voices.

The din in this usually quiet town is incredible, and it grows as the morning wears on, but nothing matches the roar of approval that goes up around midday as they greet the arrival of the first of large truck filled to the brim with juicy, squishy over-ripe tomatoes. There’s no stuffy, formal start to the celebrations, only a unique tradition: someone has to retrieve a ham hung from the top of a large greased pole before the fighting can begin. Once done (with much struggle and hilarity), and a cannon is fired to mark the official start of La Tomatina. Official instigators standing knee-deep in tomatoes in the backs of the trucks throw buckets of water at the crowds as a starter, then start throwing squishy missiles. The trucks dump their load of tomatoes on the crowds and the fight is on!

The energy flowing through the crowd is amazing to see, as everyone gets into the spirit of the event. There are a few rules – you have to squish tomatoes into a reddish mess, and you can’t throw anything else but tomatoes, but other than that, everything is game, which is especially fun as no-one – absolutely no-one – is immune. From grandmothers to respected officials, everyone gets splattered at some time during the day. Camera-wielding tourists are particular popular targets, so if you decide to stand by clicking away instead of joining in – you have been warned! Clothes will get soaked with tomato juice, bits of skin and flesh will get rubbed in hair, into ears and all sorts of other interesting places and after a couple hours, everyone takes on a reddish hue.

​​Of course, after all that tomato throwing, even the most enthusiastic celebrant can get a little tired, and that’s the perfect time to head to the Concurso des Paellas, where since early morning massive cauldrons of paella have been simmering away over wood fires, ready to feed the hungry masses, along with gallons of wine and other tempting dishes. For those who prefer not to smell of tomatoes for a fortnight afterwards, there are plentiful public showers on the riverbank, though it’s certainly not compulsory.
​
As the energy level wanes and everyone drifts off to eat and rest, the town itself is left looking like the set of an especially gory horror movie. The tomato fight really only lasts a couple hours, and a cannon sounds off to mark the official end of the fighting, after which no more tomatoes can be thrown. In true Spanish spirit however, everyone - visitors and locals alike – helps in the efforts to restore the town to respectability, hosing down tomato-stained walls and clearing off squashed vegetables, in an aftermath that is can be as entertaining as the actual celebrations. The clean-up only takes a few hours, and best of all, the day is topped off with a more sedate celebration of the town's patron saints, San Luis Bertran, with more food, wine and partying!