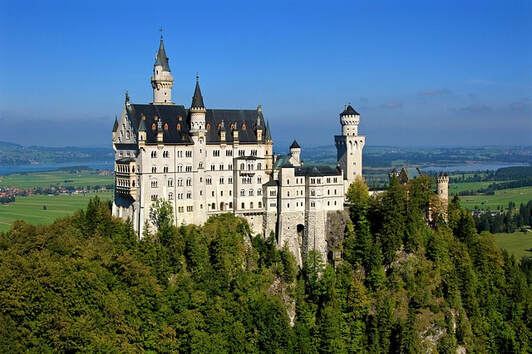 ​One of the most endearing attractions of Munich is the glockenspiel, or clock tower, and the regular performance by its moving statues and musical bells. Visitors often get the impression that the clock tower and the Neues Rathaus (New City Hall) to which it is attached is of medieval vintage, but in actual fact they were only built in the late nineteenth and early twentieth century.

Built in the Gothic revival style popular in the mid-nineteenth century, the Neues Rathaus was planned as a replacement for the Altes Rathaus, which the city’s administration had outgrown. There was a debate over whether the design was old-fashioned, at a point in time when industrialization had already taken off and the modern style was being established. The Gothic style won the day.

By the time the Neues Rathaus opened in 1874, the city administration had already outgrown it as well. An extension featuring a tall spire was planned, and the clock was funded through a donation by a local businessman.

The clock has been in operation since 1904, and has been a major attraction since then. The clock faces Marienplatz, Munich’s main square, which has been closed off to traffic since 1972. Every day, at 11 am, 12 noon, and 5 pm the clock runs a re-enactment of a royal marriage between Duke Wilhelm V and Renata of Lorraine. With statues nearly the size of real people, dance performances and a knights’ joust are recreated in full motion on two revolving circular platforms before large crowds.

The real fairy-tale castle of Bavaria

​Outside Munich there is another monument where an imagined past was brought to life in modern times. The Neuchswanstein Castle (pictured above) overlooking the Pollat River Gorge evokes a romantic vision of a heroic medieval era. So persuasive was this vision that the Disneyland Castles around the world were modeled upon Neuschwanstein.

King Ludwig II, the last King of independent Bavaria, wanted to revive the glories of the past with a series of great castles around the area where he grew up, in the Bavarian Alps region. It was begun in 1869 and remained unfinished after King Ludwig died in 1886.

The King chose the setting for his castle very well. Towering over a well-forested valley, the castle looks far too delicate to ever have been a real fortress. The outside walls were covered with slabs of limestone, making the tower look fairer than typical old castles. Its lofty towers with pike-shaped roofs give it an air of celebration, and it is well suited to a theatrical imagination.

King Ludwig was an ardent fan of Wagner, and you can see his enthusiasm in the way that some of the halls of the castle are decorated. The throne room was inspired by the opera Parsifal and was decorated in a Byzantine style, with a half-dome which recalls Hagia Sophia of Istanbul. The throne room was never completed and does not hold what would have been its most important element — the throne itself.

Other major halls and features were inspired by the various works of Wagner. There is a winter garden and grotto with hanging stalactites, a Great Chamber and the Singer’s Hall, which was built in the fashion of a hall in Wartburg Castle. The King’s bedroom is decorated with lavish woodcarvings, which reputedly took 4 ½ years to complete. The King’s bed has a canopy with the most intricate details and is overlooked by a painting of the figure of Love on the wall.

King Ludwig was often referred to as “Mad Ludwig”, and his beloved castle was often cited as evidence of his madness. As a result of his being labeled mad, King Ludwig was deposed by the Bavarian government, and he was found drowned in Lake Starnberg a few days after his ouster.