The location of Norway on the northwestern fringe of the Eurasian landmass has probably played a large role in the seafaring culture of the country. Even to this day, many of the world’s largest ships — cruise liners, super tankers and container vessels — are helmed by Norwegian skippers. Much evidence of the long and murky history of their love for long sea journeys abound, and to this day archeological evidence of a ship-centred culture emerges from excavations from time to time. In modern times, explorers such as Thor Heyerdahl and Roald Amundsen have graced the annals of daring maritime discoveries, even within the age of steam, electricity and radio.
​ 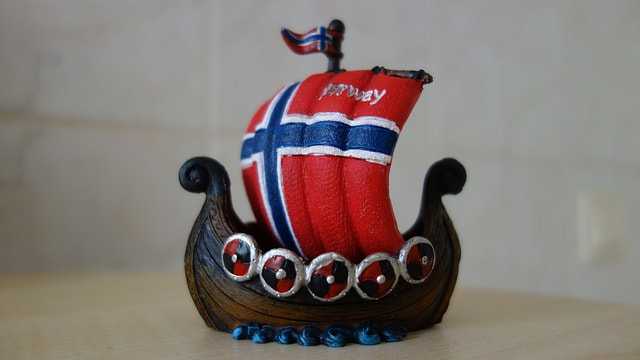 ​The early mariners of Norway were collectively known as the Vikings. The ones originating in what is now modern Norway and Denmark should be distinguished from their Swedish cousins, in view of their geographical focus. The Norwegians and Danes were more likely to wander westwards towards the Atlantic, whilst the Swedes founded trading posts in the East, in what is now modern Russia, and had trade ties with the Eastern Roman Empire and the early Islamic World.

Norwegian Vikings made their fortune on the high seas from around 800 AD onwards. Ferocious raiders, they made their name first in Ireland, and from there they expanded their holdings to include large swathes of England. At home, the Vikings carried on what would properly be described as a barbarian society, with constant tribal warring and looting, and pagan religious beliefs based upon their sagas of heroes and supernatural beings.
​
With the raids came fortune and cultural influences from the Celtic societies of the British Isles. Unification under King Olav brought about Christian influences and a more settled form of government. Before this took place, however, the height of Viking culture had been achieved, and the remains of this high Viking culture can be seen in the Viking Ship Museum in Oslo. Consisting of three burial ships which have remained relatively well-preserved for centuries, the exhibits offer visitors a peek into the religious practices of pagan Vikings.

The Gokstad was discovered in the year 1880 and was believed to have been built around 990 AD. It had been buried as part of the possessions of its departed owner, as was the custom in the period. The Viking ship is most impressive because of its shallow draught — only one metre deep. This was the first intact and genuine Viking longboat to have been discovered so it drew much attention and amazement. A replica was built and sailed across the Atlantic Ocean by Captain Magnus Andersen. Built as closely as possible to the original, it was 24 metres long, and 5 metres wide. It set sail on April 30, 1893, and arrived June 13 the same year at New London, Connecticut, in the United States. This was proof, at least, that the ship would have been seaworthy enough to allow exploration of the Americas by ancient Vikings, as the legends of Leif Erikson have long proclaimed.

The race to the poles!

​
​The Oseberg is a more ostentatious boat, built for the burial of a woman who appears to be a very important personality. Originally, it would have housed much treasure as Viking burial traditions would have called for. However, raids over the centuries have depleted the valuable artifacts. Even so, what has been recovered is still very impressive. A highly decorated wheeled cart and several sleighs display the craftsmanship of Viking artisans. The woman buried was believed to have been Queen Asa, and along with her were buried another woman believed to have been her slave, and several horses and dogs.

This boat was excavated in 1904, also very much intact. Experts believe that while this ship would have been suitable for raiding trips in Western Europe, as it would have been able to land on the beaches, it would not have been suitable to make long voyages of discovery as the Gokstad Boat would have been capable of. A third boat, found in Tune, is in a far more deteriorated state than the other two. It has been kept as it had been discovered in 1867.
Not far from the Viking Museum, we come to the Fram Museum. A triangle shaped building with the name emblazoned above a large window, this institution pays tribute to Norway’s great explorers who, in the last years of the nineteenth century and the first decades of the twentieth, extended the reach of humans to the most treacherous regions of the earth. The exploration ship Fram played a starring role in these expeditions. Launched in 1892, the Fram was designed to ride over ice instead of being broken into pieces. It remained active until the First World War, during which it lay unattended and rotting. By the end of the 1920’s a group had been formed with the intention of preserving the historic vessel and it was restored and towed into its current home on Bygdøy, where it has remained on display since.

During its career, the Fram made history in several voyages. Fridtjof Nansen commissioned the ship and attempted to sail to the North Pole in an expedition between 1893-1896. Using the unique capabilities of the ship, the crew tried to float the ship in the ice-strewn seas of the Arctic. Although the expedition failed to reach the Pole, it did achieve the northernmost degree record of 86 degrees and 14 minutes. Captain Otto Sverdrup took the Fram on an expedition in the years 1898-1902 to chart the unexplored lands of northwestern Greenland. Having played a role in designing the riggings of the Fram, Sverdrup accomplished much with this ship.
​
The most famous of the explorers to have sailed the Fram was probably Roald Amundsen. In a race with a British expedition, Amundsen feigned a move to the north, as if on an Arctic expedition. The ship later made a course for the other pole instead, and Amundsen’s Antarctic expedition placed him firmly among the legends of Polar Exploration when he successfully reached the South Pole on December 18, 1911, ahead of the British under Robert Scott.

Proving a point in a flimsy boat at sea

​In the postwar era, the challenge for Nordic navigators was no longer to go to the far reaches of the earth’s oceans first, but to relearn how the earliest explorers did it first. Resembling the exploits of Captain Andersen with his replica of the Gokstad Boat, Thor Heyerdahl’s expedition on the Kon Tiki harkens back to a time when navigating the seas was not only an uncertain adventure, but almost a certain foolhardy exercise. The Kon tiki Museum located in the vicinity of Oslo’s ship museums is a memorial to the no-tech expeditions Thor undertook on craft purposely built to be inconceivably fragile to prove that very ancient mariners would have been able to make voyages of great distance in spite of their primitive technologies.
Thor Heyerdahl was deeply interested in anthropology and theorized that Native Americans would have been able to sail to the South Pacific Islands far away from the shore. He then set out to prove that it was at least a possibility by building a balsa raft in the traditional style to prove that indigenous craft could at least have made the journey. The truth about whether the ancestors of today’s South Americans actually sailed these routes would probably remain a mystery forever. But the Kon Tiki would prove that they could have, and given other evidence it could be asserted with some confidence that they did sail to the Islands.

On 28 April 1947, Thor Heyerdahl and his crew of five sailed from Callao. While eschewing most modern navigational aids, Heyerdahl did keep a Rolex, as advertised, and did bring enough modern technology to film the historical journey. Heyerdahl made it to the Tuamotos Archipelago 4,300 miles away, after 101 days. The film of the voyage won an Academy Award for Best Documentary, and a book written about the voyage became a bestseller. And the Kon Tiki made its way back to Thor’s homeland, where it is now displayed in the eponymous museum.

Heyerdahl proceeded to make a career of building traditional craft around the world to prove various theories about navigational contact between ancient civilizations. In 1969, Heyerdahl built the Ra, a boat of papyrus made by the hands of a tribe from Chad. Heyerdahl wanted to prove that ancient Egyptians could have made the journey to the Americas using the seemingly fragile papyrus boats. The Ra set sail from Safi in Morocco, but was plagued by a defect which led to the sinking of the ship just short of Barbados on the coast of South America. Undeterred, Heyerdahl set to work on another boat, the Ra II. This time he built it with the assistance of Aymara Indians from Bolivia, renowned for their reed boats on Lake Titicaca. The Ra II made the transatlantic crossing successfully, and it too is now in the Kon Tiki Museum in Oslo.

Along with the original Ra, the other famous boat built by Heyerdahl, the Tigris, is absent from the museum. This was built in Iraq in 1977, and was the largest of the craft built by Heyerdahl. It was to have been sailed around the Indian Ocean and Egypt, to prove that the ancient civilizations of the Indus, Mesopotamia and Egypt could have maintained trade via sea. Built of the reeds from Iraq, the expedition was halted by war in the middle east region, and Heyerdahl burned the boat in Djibouti in protest.

These three museums in Bygdøy Peninsula show off the finest traditions in Norwegian seamanship and scholarship and just can't be out of your travel plans during your Norway tour in 2021. From ancient times to the age of steam, to an age of rediscovering the past, the Viking Ship Museum, Fram Museum and Kon Tiki Museum are together fine places to learn a large slice of Norway’s history.