The Royal Residence, the Real Alcazar of Seville

Many Spanish cities (especially in the south) have an alcazar, which means 'fortress' in Arabic. One of the most famous of these is the Alhambra in Granada, whose red-tinted walls on a hilltop overlooking the city have become an international symbol of Moorish Spain. Unlike the Alhambra, with which it is frequently compared, Seville's Alcazar is located smack in the middle of the bustling city in its picturesque Moorish quarter, close to the Cathedral (Seville’s other famous attraction).
​
The Alcazar has been the home of royalty for centuries. At one time Ferdinand and Isabelle, two of Spain’s greatest rulers, lived in the Alcazar, and it was here that they welcomed Columbus back from his history voyage. Today, the Alcazar is considered the oldest castle to be used as a royal residence in Europe. Spain’s modern monarch, King Juan Carlos and Queen Sofia, still stay in the Alcazar during visits to Seville. You can even take a tour of the royal apartments where the king stays when he’s in town — though for that, make sure you go in the morning!
​
​Interesting Sights in the Palace of Pedro I

There are actually three distinctly different styles in the palace, which are generally divided into the Gothic section, the Baroque section and the Moorish section. For most people though, the most interesting section is the Moorish Palace, formally the Palace of Pedro I.

There are many curious facts about this bit of the palace. For one thing, though there is a striking resemblance to an authentic Moorish castle, appearances are deceiving: the Alcazar was actually commissioned by the Christian monarch Alfonso X, almost 100 years after wresting Seville from the Moors. It was later remodelled - many times - by Pedro I, whose palace is now considered the finest example of Mudejar architecture (i.e., Moorish inspired architecture commissioned by Spanish Christians) in Spain.

Each room in the Palace is exquisitely decorated, with names which that evoke the city’s Moorish roots. For example, one of the first chambers entered is the Patio de las Doncellas (Court of the Maidens). If it happens to remind you of somewhere else, you may be right: the same architects worked on this room and on Granada’s Alhambra. Also, during the many reconstructions made to the Palace, King Pedro incorporated stones, capitals and other items he pillaged from as far away as Valencia and Cordoba.
Further along, there is the Salon de Ambajadores (Ambassador’s Hall), where the dignitaries from other courts were once received. The hall is focused on a magnificent cedar cupola and is the most magnificent hall in the palace. Here, you’ll also find one of the most quintessentially Moorish decorations: a trio of symmetrical, ornate arches, which look like they were taken straight out of the Arabian Nights.

The Alcazar has plenty of charming features, but probably the most subtly significant are the fountains and pools in the palace. Though rather unremarkable today, In those days, such profligate wasting of water for nothing more than prettiness was a sign of extreme wealth in those days, and the kings of old wanted to make sure everyone knew it!

One of the loveliest pools in the Alcazar is down in the cellars. Stretching into the distance under a dark, vaulted ceiling, there are the famous Alcazar Baths, or more formally the Baņos de Doņa Maria de Padilla. This mysterious pool was once used as a swimming pool for the palace residents, though nowadays most people throw coins into it for good luck. Serene and cooling, this is one of the most atmospheric rooms in the palace.

Gruesome Tales in the Alcazar 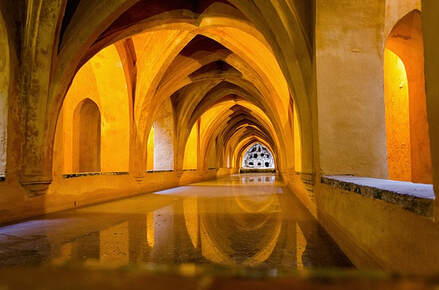 There’s a grisly story attached to the Baths too — they were supposedly named after the reluctant love interest of King Pedro, the illustrious noblewoman Doņa Maria Fernandez Coronel. According to the story, upon the death of her husband by order of King Pedro, Dona Maria was subjected to a determined courtship until finally, to rid herself of the king’s unwanted advances, the noblewoman splashed her face with boiling oil, horribly disfiguring herself.

There are plenty of other such grisly tales connected to past nobles and their misdeeds. A lot of the stories centre around King Pedro I, whose behaviour is best illustrated by his nickname Pedro the Cruel (though later he had it changed to Pedro the Lawful). Deep inside the Palace, in the Patio de la Munecas (Court of the Dolls), Pedro supposedly had his half brother murdered, as well as a guest who’s jewels he coveted.

He wasn’t the only ruler to have indulged in dirty doings, however; In the days of the Abbasid Dynasty, when the palace was in the hands of the cruel Moorish monarch al-Mu’tadid, the terraces of the palace were decorated with flowers — which were planted in pots made from the skulls of his enemies!

Other Attractions in the Alcazar

​King Pedro wasn’t the only one to build a palace at the Alcazar; just to the right of Pedro’s residence is the Renaissance Palace of Carlos V. Here, you’ll find more evidence of the might and power of the Spanish Empire during the 16th century — there are rare clocks, stunning azulejo tiles, a priceless collection of tapestries showing the life of the emperor and much more. Don’t forget to look for the map of Spain, which famously shows the Iberian Peninsula upside down; this was apparently the custom in Arab mapmaking.

Once you’re done roaming the palaces, take some time to wander around the vast gardens outside. They are a wonderful retreat from the heat of a summer day and make an interesting contrast to the palaces: one, the Jardin Ingles (English Garden) was modelled on 18th century English gardens, and the other, Jardin de los Poetas (Poet’s Garden) was designed along the lines of the famed Arab water gardens.