Rome: Things To See & Do

Often considered the symbol of Rome, this magnificent ruin is indelibly linked to the past glory of the Roman Empire, and its subsequent decay and fall.
​
Opening Hrs: From end March to end August: 9 am - 7.30pm; until 7pm in September, until 6.30pm in October, until 4.30pm from end October to mid-February and until 5pm from mid-February to end March.
Pricing: Full ticket: EUR 20; discounted ticket: EUR 10 (for EU residents between 18 and 24).
Getting Here: Metro Line B: Colosseo, or bus 87

Begun by Julius Caesar as an answer to the overcrowding of Rome's older forums, this vast area was once the centre of Roman life. Though mostly ruined today, there are still intriguing signs of its past grandeur and archaeological work continues in and around the site today
Pricing: Admission is free; guided tour is EUR 3.50
Getting Here: Via de Fori Imperiali. Metro: Colosseo. Keep to the right side of the street

An administrative centre during ancient Roman times, in 1538 the papal government decided to restructure it and tasked Michelangelo to do it. His elliptic design is a splendid example of how to deal with the awkward geometry of the buildings and the requirements of the commission. The centerpiece of the piazza is a replica of the famous bronze statue of Emperor Marcus Aurelius. The original is now housed indoors to preserve it from pollution.

One of the most complete Roman Imperial era buildings still standing, the Pantheon boasts the largest masonry vault ever built in its dome, with a hole in the middle to admit sunlight into the building. Originally used as a temple, it has served as a church and is now the final resting place of Italy's first two monarchs, and the painter Raphael. 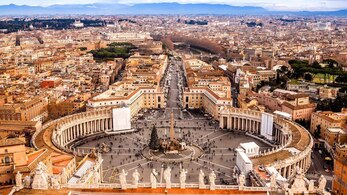 Is the smallest sovereign state in the world exists for the sole purpose of hosting the headquarters of the Roman Catholic Church - the Holy See. Start off with the enclosed circular St. Peter's Piazza and the magnificent Basilica. From its sculpture - Michelangelo's Pieta, and the small statue of St. Peter whose toe was traditionally kissed by devotees, to the heavy carvings of the canopy near the alter and the brightly decorated altar itself, the basilica is a testament to the glories of the Roman Church and its legacy. You may even bump into one of the many religious events held here, which typically result in crowds of thousands in the Piazza.

Museums of the Vatican

Housing a superb collection of antiquities and artwork ranging from ancient Egyptian, Imperial Roman, Medieval and Renaissance works, these storehouses have some of the greatest treasures of Western Civilization.
Opening Hrs: April-October: Open Mon-Fri, 8:45am - 3:45pm (admission until 2.20pm); November - March: Mon-Fri, 8.45am-1.45pm (admission until 12.20pm ).    Open Sat, 8.45am - 1.45pm (admission until 12.20pm) year-round. Open and free on the last Sunday of the month, same hours as Sat. Closed Catholic holidays.
Pricing: Full ticker EUR 12; reduced ticket EUR 8 (26 or under with ISIC card).

Once a key fort in the city's defense system, this was originally the tomb of Emperor Hadrian. During a siege in the 16th Century, the jeweler - sculptor Benvenuto Cellini was a heroic defender on the ramparts of the Castel. Puccini's famous opera Tosca has the heroine falling to her death at this site.

Gathering place of large numbers of people. The staircase is an impressive structure connecting the Church of Trinita dei Monti with the square known as Piazza di Spagna, and was named for the Spanish Embassy located there. 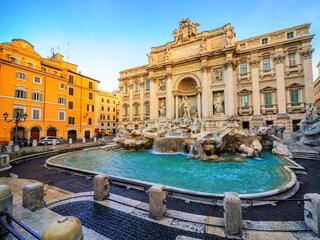 Once the main Roman highway to the eastern coast of the Italian Peninsula, this road is lined with tombs of Roman citizens, many of monumental dimensions. Cars run on parts of this road on weekdays and Saturdays, but some parts are closed on Sunday.