In the Footsteps of Romeo and Juliet

Each year, thousands of Shakespeare buffs, newly-wedded couples and romantics fascinated with love lost and undying romance make their way to this city to follow in the footsteps  of the young lovers. What they find may be surprising.

​The tragic legend comes to life in rather unexpected ways in Verona. The city is still home to the ancient clans of Capello and Montecchi, the families that Shakespeare turned into the Capulets and Montagues. As far as anyone can tell however, Shakespeare’s beloved young characters are fictitious. Romeo and Juliet were fairly common Christian names in medieval Italy, the time period of the story, but there have been no records discovered showing that they were actual persons. Most scholars believe that Shakespeare simply reworked an old drama by an Italian playwright.

The lack of factual basis sometimes puts people off the city entirely, but many people are still willing to use their imagination to fill in the gaps left by documentation. For this reason, entire Italy package tours of camera wielding tourists can be seen happily tramping around the city to see the site of the most romantic episodes in all of literature — the immortal balcony scene.

Juliet on the balcony 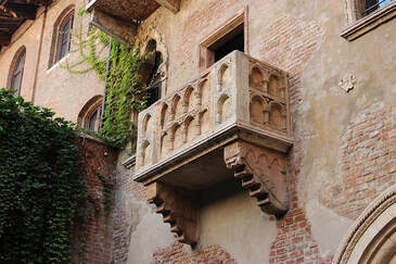 The iconic episode is said to have taken place at the Casa di Guilietta which is situated at No. 27 Via Cappello (yes, the street was named after the family from which Juliet was born).

Sadly, the reality is that the entire house is a 13th century inn restored to fit the time period of the  drama, though historians offer the reassurance that the restoration did do a remarkably good job of recreating the environment in which Juliet would have lived. For those interested in recreating the balcony scene, there is a smart marble balcony (pictured left) set to the side of the Casa, and for a small fee, a picture of the yearning ‘Juliet’ can be taken and even embossed on a mug. 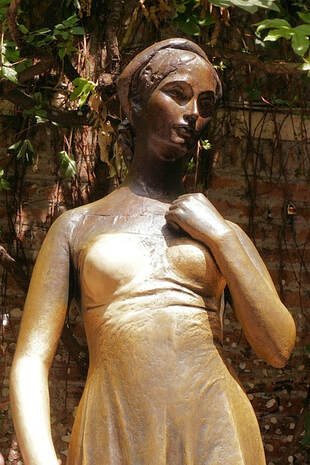 For those more interested in future romance, there is a bronze statue of Juliet (pictured right) standing in the Casa courtyard. The statue is meant to recall the ‘golden statue’ Montague intended to erect after Juliet’s death and popular tradition says if a male visitor rubs the statue’s right breast and wishes for luck, true love will come to the wisher in four and twenty hours. Though no one seems to know just how that tradition started, there is a often a line of patient tourists waiting for their turn to try their luck and it isn’t surprising to see that the statue’s breast is now very shiny.

Another popular Juliet site is the Tomba di Giulietta, her supposed final resting place. This slightly morbid curiosity is located in the crypt under the San Francesco al Corso cloister on Via del Pontiere. Fortunately, the tomb is empty, and for those who appreciate this sort of thing, rather pretty really.

Of course, one can’t neglect Romeo — but unfortunately, the young lad is slightly less prominent than his fair maiden, for the house in which he is supposed to have stayed, the Casa di Romeo, is closed to visitors. The only link to Romeo is a simple plaque on the wall. Though Romeo hunters might be disappointed not to see the interior of the house, they can still be impressed by the formidable fortifications of the house itself. With its thick stone walls, crenellations, and tower like blocks, it has more than a passing resemblance to a miniature castle. The Casa di Romeo is located at 4, Via delle Arche Scaligere, and even though historians insist that the house is really that of one Cagnolo Nogarola, visitors still come in hopes of seeing the romantic Montague’s home.

Though purists may avoid both the casas as being inauthentic tourist traps, Verona is often the only setting needed to recreate the tragic story in the visitor’s imagination, with its thick-walled mansions and fortified houses. Just as the Bard’s tale declared, in Verona’s medieval age, the Capellos, the Montecchis and many other prominent families in the city were engaged in vicious inter-family strife, over everything from politics to economics and social standing. These fierce rivalries often lead to complex intrigues and the occasional outbursts of violence. The constant fighting resulted in the building of houses like the Casa di Romeo, more miniature castle than stately townhouse.
​
These formidable mansions give even the casual visitor a sense of the danger each family felt awaited them outside their doorstep, and the strong mistrust they had of each other. More than any simple balcony or tomb, these houses give an idea of the barriers separating the two young lovers, and of how being born in the wrong family could mean disaster and death for those burdened with a family feud.