Why Is St. Basil's Cathedral So Famous? 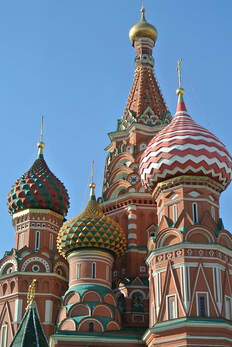 ​If you’ve got nothing to do one day, preparing to the trip to Russia in 2021 try asking the people around you this question: What is the most famous building in Moscow? If most people were asked, chances are they would reply with one of two answers: either the Kremlin, or the Cathedral of St Basil and its swirling onion-domes. The Kremlin leaps to mind for the obvious reason that it is the seat of ultimate power in that vast country, but the almost equally instantaneous choice of St Basil’s Cathedral is rather interesting, because apart from the fact that it is a pretty building, most people don’t actually know that much about it!
For a start, the Cathedral’s proper name is the Cathedral of the Intercession of the Virgin on the Moat (referring to the moat which still runs beside the Kremlin today). Since the official name is quite a mouthful, it’s not surprising the Cathedral was quickly nicknamed ‘St Basil’s’, after Saint Basil the Blessed (1468-1552), a popular figure with the Muscovites of the time whose was buried in a tomb in the ninth chapel after his death. Be that as it may, the popular choice of St Basil as the most famous building in Moscow does lead us to the question: Why exactly is it so famous?

Of course, a lot of things become famous just because they’re pretty, and St Basil’s Cathedral is very pretty indeed. The redstone walls are highly ornamented with arches, triangles and other traditional Russian designs (rather like an elaborate wedding cake), but the Cathedral’s best known feature are its eight brightly-coloured onion domes, each a different size and pattern. The vibrant, cheery colours of the Cathedral make a sharp contrast to the more subdued colours of the buildings surrounding it, and on a gray winter’s day, when the rest of Moscow seems wrapped in gloom, the Cathedral remains one of the brightest sights in the city. If everything were decided by looks, little wonder then the Cathedral is a popular symbol for Russia, used in everything from little snowball globes to airline advertisements!

Still, the Cathedral’s looks aren’t the only reason why it is so well known. The Cathedral has been intimately tied to Russian history for the since it was first commissioned by the infamous Tsar Ivan the Terrible in 1555, and it was built to commemorate the tsar’s victory in retaking the distant city of Kazan from the invading Mongol Horde in 1552. The idea was to build one chapel in honor of each saint on whose feast day a successful assault occurred, which is why there are eight onion domes, with a towering central spire uniting the eight into a single Cathedral. So, from a purely historical point of view, the Cathedral would probably definitely be considered famous for being a religious monument built to celebrate a military victory.
Another reason for the Cathedral’s enduring fame is, literally, its endurance. It has barely escaped destruction numerous times over its history, but perhaps the closest it came to actual demolition was at the hand of Napoleon’s invading forces. Napoleon was reportedly so taken with the pretty cathedral that he wanted to bring it back with him, but since he couldn’t figure out a way to do that, didn’t want anyone else to have it either; so he gave orders for it to be destroyed during the retreat from the city. Napoleon’s soldier reportedly set out kegs of dynamite and lit the fuses, but a sudden short shower put out the fuses and stopped the impending explosion. Whether that’s actually true is debatable, but a miraculous save certainly didn’t hurt the Cathedral’s holy reputation and did help increase its stature!

Because It’s on TV!

Still, when it comes down to it, for most people, the reason they’re familiar with the Cathedral may just come down to television, or more specifically, television reporters. In true television journalism tradition, when the reporters make their news broadcasts, they prefer to stand in front of some scene relevant to the news they’re reporting – and for the last fifty years or so, most of the news worth reporting from Moscow have had to do, one way or another, with the dictates emanating from the Kremlin. So, journalists would stand in front the Kremlin, and since the Cathedral is right next to the Kremlin – and it’s is a whole lot more noticeable than the imposing walls of the Kremlin – people would of course notice it, and perhaps mistake it for the Kremlin. So over the years, after seeing the Cathedral peeking over an earnest reporter’s shoulder on TV thousands of times, you can hardly blame people if they immediately think of it when they think of famous buildings in Moscow!So there you have it – the reasons why Saint Basil’s Cathedral is today one of the most iconic Russian sights around the world!